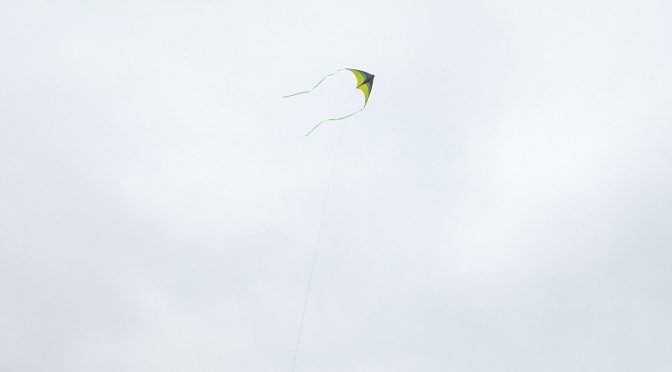 Yesterday afternoon was gray, blustery, and a little wet here in central New Jersey as a result of the remnants of Hurricane Ian. Coupled with the afternoon off from any work or household commitments, it was the opportune time for me to settle a 5-year question that has nagged at me:

Are toy kites a friend or foe to elevating ham radio wire antennas for field use?

A toy kite and a cup of coffee overlooking Joseph Lawrence Park in Bordentown NJ.

“Whoah!” — not the namesake of THAT Joseph (Joey) Lawrence

It’s been well over 35 years since I’ve last flown a kite, which was on the beach at the New Jersey shore. I remember my uncle affixing a delta kite to a fishing rod for me, and within seconds the kite shot straight up 200-feet (60-meters). Although I was ten years old, I remember there was quite a steady pull on the pole, and once I grew tired we placed the pole in a rod holder, affixed the line around the bumper or grille of his pickup truck, and there the kite flew unattended for several hours.

Remembering this experience, when I first got interested in amateur (ham) radio in 2017 I wondered if this could be an answer to the age-old “height is might” metaphor when it comes to antennas. The trouble is, I’ve never seen or read about anyone trying it at the annual June Field Day events. Surely I could not the first person to give this a try?

I took a short drive to a brand-new parking lot overlooking Joseph Lawrence Park in Bordentown NJ. The wind here was blowing toward the west instead of the usual east, which likely was coming from the ocean fifty miles away as remnants of Hurricane Ian.

To my back on the opposite side of the two-lane road was a several acre soybean field, and in front of me was a large grass field that looked like it in the final phases of being prepped to accommodate several new soccer fields. Between the wide-open location and the wind, I don’t think I could have found a more perfect kite-flying location.

As for the setup, my vision was similar to that I experienced as a kid. If I could fly the kite up about 100-feet (30-meters) and then place a mid loop knot in the line and affix one end of an end-fed half-wave (EFHW) antenna cut for the 40-meter band, there should be enough pull on the kite to raise my antenna the 65-feet (20-meters) into the air to begin operating on the 20-meter and 40-meter ham bands.

Getting the kite up in the air was … well … it was a breeze. The kite wanted to fly. But once it climbed to 75 – 100 feet (20 – 30 meters), the slightest drop in wind speed would cause the kite to float back down toward ground until another gust of wind picked up. So for every three minutes of passively holding the kite line, I’d have to actively draw the line taught again to get the kite to climb in the air once more. It was a constant dance of putting tension on the line.

There was a bit of pressure tugging on the line between me and the kite. It was maybe 10 – 15 lbs of force that should have easily lifted a length of 14g – 18g antenna wire into the air. But due to the active work of flying the kite, I never had the opportunity to tie off the line to the car, set up the EFHW antenna, and then actually work the bands.

The streamers on the kite were annoying, tangling around my legs in the grass and in the hatch of the vehicle. I cut them off, and this seemed to later inhibit the kite from getting off the ground. I think I remember hearing or reading as a kid that a kite’s tail is more than aesthetic, but actually contributes to flight. But by this time I had had enough kite-flying fun for the afternoon.

So was this a successful ham radio activation?

No. Being alone and actively flying the kite gave me no time to affix the antenna, tune up, and attempt to make contacts.

Is it plausible to think a toy kite and raise an antenna?

Yes, I think it is plausible if wind speeds are significantly faster, and/or one has a helper to tend to the kite while the other makes contacts.

A $9 toy kite does make this approach economical if the aim is to get an 80-meter or 40-meter EFHW elevated as high as possible.

No, not at all. I could have easily parked my car next to some trees and thrown my EFHW antenna up over a limb and begun making contacts in a fraction of the time.

Yes. Experimentation is always fun. Even if the outcome wasn’t what was imagined or deemed “a success”.