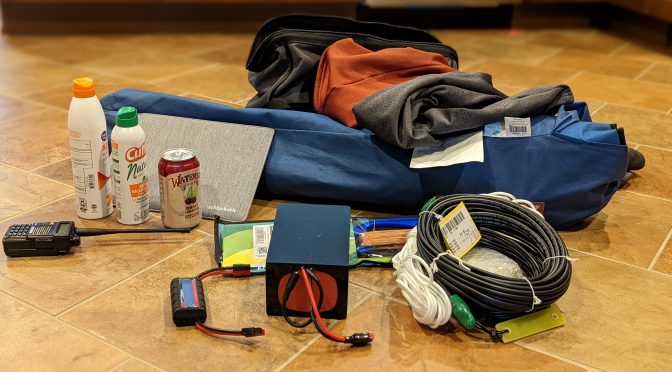 This past Saturday I pulled off my very first portable high frequency (HF) operation by participating in Parks on the Air (POTA), an amateur radio event that promotes portable operation from national/federal and state/provincial level parks.

It was nearly one o’clock in the afternoon by the time I swallowed down a quick lunch and headed into the basement to hastily pull together some assorted radio and outdoor gear. My plan was to take the fifteen minute drive from home to the Assunpink Wildlife Management Area in Robbinsville, New Jersey and operate my radio gear from there.

Upon arrival, I planned to park and set up my equipment at the shotgun and archery ranges as I’ve never seen them in use over the last forty years I’ve driven into the property. Except of course that day, as both ranges were packed with archers and sharp-shooters.

I continued driving past the ranges deeper into the property toward the lake and boat launch, then veered off onto a dirt path that split between two narrow corn fields. Pulling off the path, I parked and connected together my equipment to my brand-new Bioenno battery. My equipment came to life, and this part of the experiment was a success.

Because the cooler temperature made it feel like New Jersey’s first autumn day of 2022, a second experiment of the day was to attempt to to launch a toy delta kite about 150-feet (45 meters) into the air and to attach my end-fed wire antenna to the last 65-feet (20 meters) of kite string. But the wind was uncooperative and wouldn’t lift the kite, so this part of the experiment failed. Having no place nearby to hang my antenna wire, I packed up and moved my vehicle to the lakeside asphalt parking lot of the boat launch area.

I must have proved to be entertaining to watch at the boat launch as I enacted my Plan B by affixing my antenna and paracord to a ratchet strap that served as an impromptu throwing weight. It took four attempts to heave the ratchet 30-feet (10 meters) into the air and over top a tree limb. On the third attempt, I felt my wedding band slip off my finger and heard it bounce and skid across the asphalt to my right. Thankfully I found the wedding band within seconds, and was fortunate it slipped off my finger on my downswing, as my throwing arm was mostly aimed leftward toward the woods where it’s unlikely I would have recovered my band.

After the requisite sigh of relief, I affixed my wedding band to my car key ring and made another throwing attempt, finally positioning my wire antenna over the desired tree limb and pulling it back down to the ground where I tied it off to a tree trunk, forming my antenna into an inverted V shape.

By now I was back at my vehicle when my friend Jeff KD2SCR arrived and set up his own equipment. We each enjoyed two hours of company in the sunshine as Jeff successfully activated on the 40-meter band, and then when he was finished I made my contacts on the 20-meter band. All but one of my contacts were domestic to the United States, with the exception of Italy.

I enjoyed operating my equipment portable outside on an autumn afternoon where the dropping sun glistened on the water and the sounds of birds and spinning reels could be heard in the distance. This peaceful experience is a stark contrast to my usual operating position in the basement beside painted cinder block walls and the ever-present hum of a dehumidifier.

I definitely see more portable operation in my future.