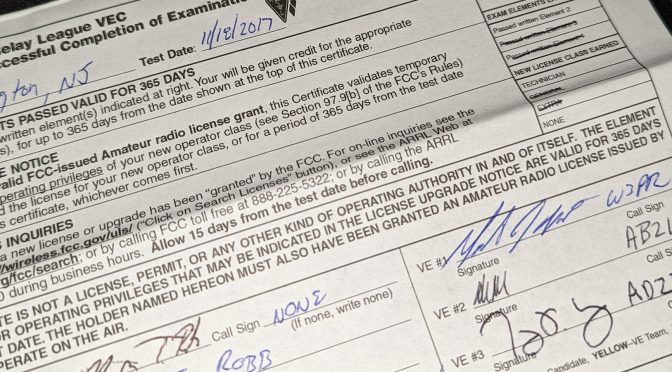 It was five minutes to noon and cold rain fell hard against a troop of girl scouts as they ran with poster-board projects from the door of the Hopewell branch public library to their parents’ idling cars.

I’ll wait five more minutes, I thought as I sat dry in my own car watching through the rear-view mirror.  The exam doesn’t begin until twelve-fifteen.  Maybe I’ll catch a break in the rain.

I spent two months preparing for my Technician exam and set my eyes to attend the closest license session, a twenty-minute drive from my home that was sponsored by the Delaware Valley Radio Association.  By the time exam day arrived I had taken several online practice tests and passed most with a comfortable margin, missing only two or three questions on each attempt.  I’ve got this, I thought.

Once inside the library meeting room, three welcoming gentlemen from the DVRA sat at a table in front.  I took an available seat at a folding table and was surprised to see I was one of about fourteen people in attendance.  I had expected three.  The exam-takers were like me, mostly men in their thirties and forties, but there were two women and two high-school aged young men as well.  With fourteen people in attendance, clearly amateur radio isn’t a dying hobby.

At the scheduled start time the Volunteer Examination Coordinators (VEC) from the DVRA explained a little bit about the test and walked the room distributing the materials, checking photo IDs, and collecting the nominal examination fee.  And with that, we were free to begin the exam.

The noise level in the room grew a bit as the VECs spoke quietly grading the exam, calling out names and giving a “thumbs up” sign indicating to those that they passed.  At this point I was only about 2/3rds of the way through the exam.

It was at this moment I felt like I was back in grade school.  My heart raced a bit as I envisioned myself being the last person to complete his exam.  This is silly, I thought.  So what if I’m the last person to complete the exam.  I want to pass.  I sat back in my chair, took a deep breath, then finished the questions at a leisurely pace.  Don’t let the noise level rattle you, I thought.  You know the content well!

I spent another five minutes revisiting each question and I changed my answer to only one.  Surprisingly, it was a question that I had never encountered during any of the practice exams but felt eerily familiar as if it was likely the inverse of another question with which I was familiar.

I waited five minutes until my name was called and I was flashed a thumbs-up sign.  Phew!  A few minutes later I was called up to the table and asked to sign my examination form, then handed the top-sheet of a three-sheet carbon copy stack.  I quietly collected my pencils, pushed in my chair, and left the room.

Twelve calendar days passed while I patiently checked the FCC Universal Licensing System page for validation of my call sign record.  On November 30, I was officially assigned the call KD2OTG.  I am now a licensed amateur radio operator.