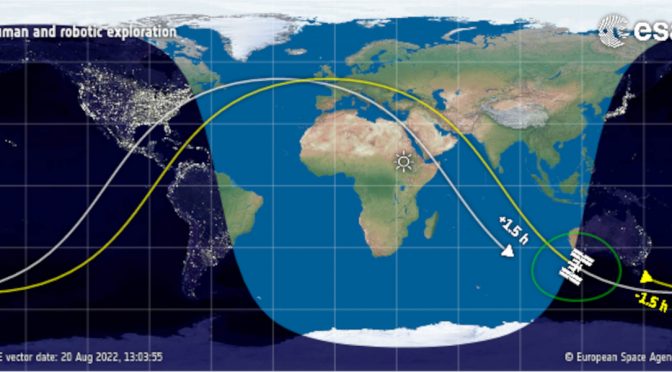 In the video, Jeff sits in my New Jersey home’s basement while talking on a radio that is connected to a Yagi antenna in my backyard that is aimed in the northwest direction.

As Jeff transmits, his signal is received by a relay repeater radio aboard the ISS that is traveling eastwards at 17,400mph. Jeff`s signal is received and re-transmitted on a different frequency back to Earth where it is heard by other amateur radio operators.

Explanation of the short exchanges

An amateur radio operator has approximately ten minutes of direct “line of sight” to the ISS before its path of travel puts it out of range due to the curvature of the Earth.

Amateur operators intentionally keep exchanges brief to give others the opportunity to make contacts in the short ten minute time window.

The featured image shown in this article is a screen capture from NASA’s Live Space Station Tracking Map that displays where the station is located at any time above Earth. The tracker shows current position and its path 90 minutes ago (-1.5 hr) and 90 minutes ahead (+1.5 hr).